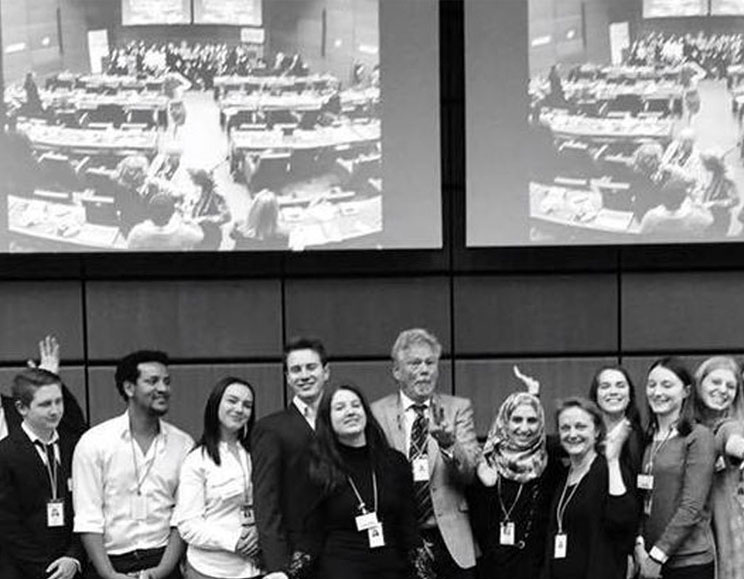 The conference (“Achieving Gender Equality and Female Empowerment: A Collaborative Vision of SDG 5”) was delighted to welcome Doaa as a speaker and participant.

In her opening address to the plenary, Doaa said, “Equality between men and women means achieving justice in dealing with both genders in different situations, social and legal affairs, democratic activities, job opportunities, and opportunities for study… only such equality paves the path for development and community building.”

She continued: “As half of the society, women should not be absent or set aside, as is the case in many countries. Disabling the capabilities of women stands in the way of development.” Doaa called for a global change “in terms of economic, social and political matters,” adding that “the most important thing is to stop the wars.”

Doaa noted: “Change begins with simple things, yes simple things, because you as a human being will not accomplish greatness without making minor changes, respecting everyone, fighting injustice, giving hope and never giving up.”

The conference was hosted by the Vienna Liaison Office of the Academic Council on the United Nations System and held in cooperation with the Regional Academy on the United Nations. Doaa concluded her speech by addressing the youth in the plenary: “If we contribute to change, future generations will live in a better world. If we want to achieve peace, let us start with ourselves and with the power we have.”

Connected to the UN conference was an Austrian Broadcasting Corporation (ORF) event held at Webster Vienna Private University: “How to Change the World.” This ORF Dialogue Forum event, live-streamed to viewers across the world, featured initiatives, organizations and people striving for peace.

At the Webster-ORF event, Doaa discussed her treacherous journey to Europe and called for both peace and greater societal awareness about refugee issues. Her participation at this event was later turned into an ORF television segment.